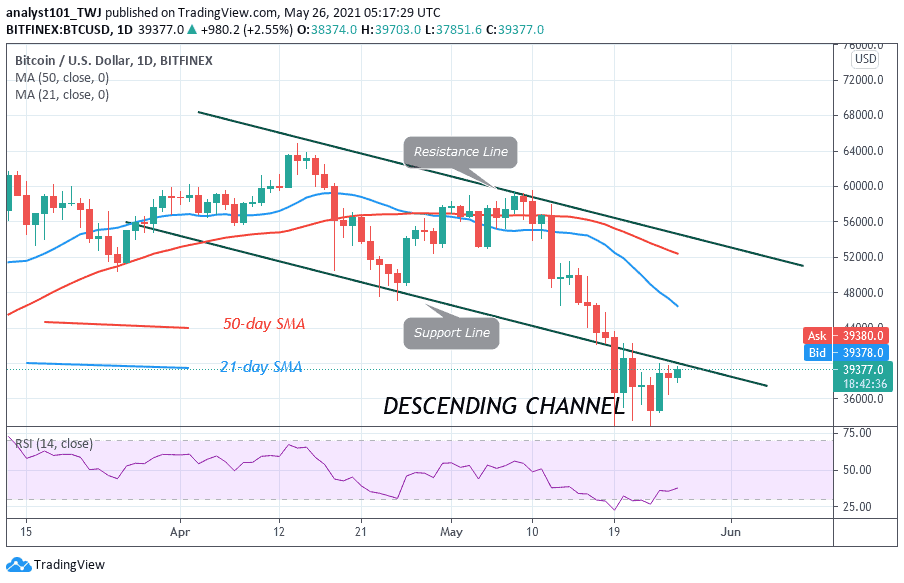 For the past 48 hours, BTC/USD has been consolidating above$36,000 as Bitcoin battles $40,000 resistance. Buyers have been unsuccessful on previous attempts at the resistance level. Today, the market is rising and approaching the $40,000 high. Bitcoin will rally to $46,000 if the price breaks above the recent high. However, it will continue its range-bound move if the $40,000 remains unbroken.

There has been no significant price movement since May 19 breakdown. Initially, Bitcoin was fluctuating between $32,000 and $42,500. Now the king coin is trading marginally as price consolidates above $36,000 support. The support at $36,000 gives buyers the privilege to retest or break the $40,000 resistance level. Bitcoin is expected to rise to $46,000 if buyers sustain the bullish momentum above the $40,000 high. However, if BTC price consistently turns down from the recent high, it will suggest that the downtrend is likely to resume. There is a likelihood of price reaching the low of $28,000 if the bulls fail to resume upside momentum above $40,000 high. In the meantime, the bulls have partially broken above the $40,000 resistance. BTC/USD is now trading at $40,662.70 at the time of writing.

Pavel Krasheninnikov is the chairman of the Russian Duma’s Committee on State Building and Legislation. He indicated that the government is allowing for amendment on civil law to allow crypto payments as a “contractual medium.” Because of this, lawmakers are reportedly weighing a partial reversal of the country’s ban on cryptocurrency payments. Krasheninnikov indicated that cryptocurrencies like Bitcoin are not yet a legal payment method in Russia.

The proposed amendments would allow crypto payments in Russia under contractual law. That is the payments would be only possible with the consent of all involved parties: According to the chairman : “We believe that it is necessary to make amendments to the Civil Code, the initiative is currently undergoing a necessary approval procedure. Currently, there is an understanding that digital currency is not legal as payment but this payment method, quite possibly, can be contractual.”

Meanwhile, the BTC price has broken above the $40,000 high. However, the bullish momentum is yet to be sustained above the recent high. It may portend negatively if the current bullish momentum is repelled. The Fibonacci tool analysis is held as price rebounded above the 2.0 Fibonacci extension level. Bitcoin bulls have an uphill task as the king coin is battling to rise in the bearish trend zone.

In 2020, Decentralized Finance is a Hot Trend — Along With Yield Farming And Governance Tokens – Blockchain News, Opinion, TV and Jobs